I could says thanks every day to my contributors and it wouldn’t be enough.  That they answered my call for submissions and had faith in the project sustained me when my confidence wavered.  Solace in So Many Words wouldn’t be anything without them — not only are they generous artists, they’re terrific writers, and I am not the only one who thinks so.

Wally Swist’s new book, Huang Po and the Dimensions of Love, was chosen by Yusef Komunyakaa as a co-winner in the Crab Orchard Series Open Poetry Competition, and will be published by Southern Illinois University Press in the spring of 2012.

Elizabeth Kerlikowske’s Her Chores, an instant chapbook and minibroadside, are out from Binge Press. Book tour of four authors May 13-16, in Kalamazoo, MI, Detroit, Buffalo, NY, and Saginaw, MI. Watch for us!

Ellen Bass is featured on the cover of the current American Poetry Review and has ten poems in the issue as a special supplement.

Pamela Malone has a blog on opensalon.com and has posted two essays thus far, “Overwhelmed” and “What Makes An Icon an Icon.”  She  also have a flash essay, called a Flash in the Pan, titled “There” at Tiny Lights, a journal of personal narrative.

Kathleen Kirk will participate in a group poetry reading at Woman Made Gallery, 685 N. Milwaukee, Chicago, IL, on Sunday, April 10, 2-4 p.m., as part of the 14th International Open, a exhibit of art by women from around the world. She has new work out now or soon in Right Hand Pointing, Eclectica, and Burnt Bridge.

D. I. Gray reports on two previous  nonfiction publications: “Carrying a Book of Myths: On Modern Motherhood, second place winner of Women’s History Month essay contest in 2007, and “A Radical Reconfiguration: Academia, Islam, and the Pragmatic as Lenses for the Modern Feminist Predicament” first place winner in the 2006 Women’s History Month essay contest.

Patti Wojcik Wahlberg writes that her writing career has been filled with many name changes. I first came to know her when she appeared in Kiss Me Goodnight (as Patti Couch Wahlberg).  In Slipstream and The Blue Mouse she has work under the name Patti Couch.  That also is the name on her chapbook, Doomflower, which was published by the Laguna Poets. When her work appeared in Up Against the Wall, Mother in the 1990s, it was under the name Patti Patronite.  Maybe this will help you find past publications by Patti Wojcik Wahlberg, the name she is sticking with these days!

The book I have been most excited about, next to Solace in So Many Words, is When the Killing’s Done by T. C. Boyle. Receiving stellar reviews from coast to coast, the book, his 12th novel has been said to be his best one yet.  Barbara Kingsolver called it  “a smart and rollicking novel, with suspense and shipwrecks galore” in her New York Times Review. Richard Rayner of the Los Angeles Times, says of T. C. Boyle, “He’s never not a funny writer, whether flexing his muscles in the delirious sprints that are his short stories, or in the intricately plotted and sometimes slightly schematic marathons of novels like this one; he writes lyrically, beautifully — about the ocean, the land, about California history and its pitfalls and perils.” 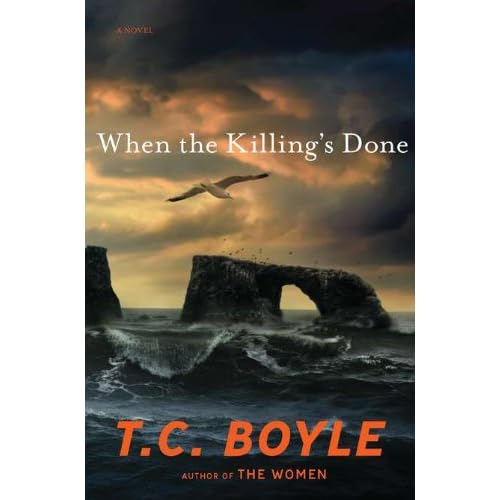