I think I first met Carol Kanter (“Her Best Medicine,” “Alternative Eulogy” and “The Advanced Course”) in the back of Books on Vernon when we both signed on for a poetry-writing class with Larry Starzec; he is a former businessman who came to poetry as a second career, studied at one of those low-residency programs and now teaches at Lake County College. This was in the 1990s. If my memory serves me correctly, Fran Podulka, Constance Vogel and Joyce Gordon were also signed on (and a woman named Gretchen whose last name escapes me right now).

But this blog is about Carol. And not just about I came to meet her, but how I came to know her. We haven’t met at the back of the bookstore in years.  After Larry, the group of us (minus the aforementioned Gretchen) sought other teachers, taking alumni enrichment courses at Northwestern University taught by Reginald Gibbons, Clare Cavanaugh and Mary Kinzie, who also led some workshop groups we were lucky enough to get in on.

We workshop each other’s stuff now. Or at least we keep meaning to, I admit, it has been a while since the gang reunited to work on poetry.  We have been distracted by life. But we all keep writing. And perhaps the most diligent of the group is Carol Kanter.  Just recently I heard she has two poems coming out this fall: “Elevators” which will be in Earth’s Daughters and “The Taj Mahal” which will be Atlanta Review.

Even if we don’t see each other for poetry workshops, we still see each other. We have attended wakes, weddings, parties and poetry readings (the best was probably Billy Collins). I’ve gotten to know Carol’s husband Arnie Kanter.  What sets apart Carol and Arnie from other couples I know is that they have collaborated on a book together. If that weren’t admirable enough, the book is a masterpiece. It is No Secrets Where Elephants Walk and published by Dual Arts Press, and it features Arnie’s outstanding photographs and Carol’s stellar poems that came from their three trips to Africa. My copy of No Secrets Where Elephants Walk is on the piano in the living room and it never fails to draw in readers who stop to glance at it and end up enchanted by every page.

Another remarkable thing about Carol is that she and her daughter Jodi Kanter (“High-End Grocery Solace”) contributed to Solace in So Many Words and they are the only mother-daughter duo in the book.  But it is not the first time Jodi has appeared in print with a parent. She and her father co-wrote The Lawyer’s Big Book of Fun. And, with his daughter Wendy Kanter, Arnie co-wrote The Teacher’s Big Book of Fun.

Space doesn’t permit here to list all the books written by Carol Kanter, Arnie Kanter and their daughters. In addition to being a poet with two chapbooks from Finishing Line Press, Carol is psychotherapist in private practice and has written And Baby Makes Three (Apochryphil Press) and Arnie is a lawyer who has more than ten books on legal topics and his beloved Chicago Cubs.

Here’s how Carol and Arnie describe their book together, “No Secret Where Elephants Walk weaves poetry with images from Carol and Arnie Kanter’s three trips to Africa, trips that led them to discover more about their world and themselves. With only a few exceptions, Carol’s poetry and Arnie’s photographs were produced independently, with no thought of combining them. In creating No Secrets, they found that their separate approaches to what they saw and experienced—sometimes similar, sometimes quite different—complemented each other.

In No Secrets, they invite you to share these trips with them, and hope that their book may inspire some of you to prolong and enhance the enjoyment of your own travels through the exercise of your particular artistic talents.”

Here’s a peek at some of Arnie’s wonderful photos. 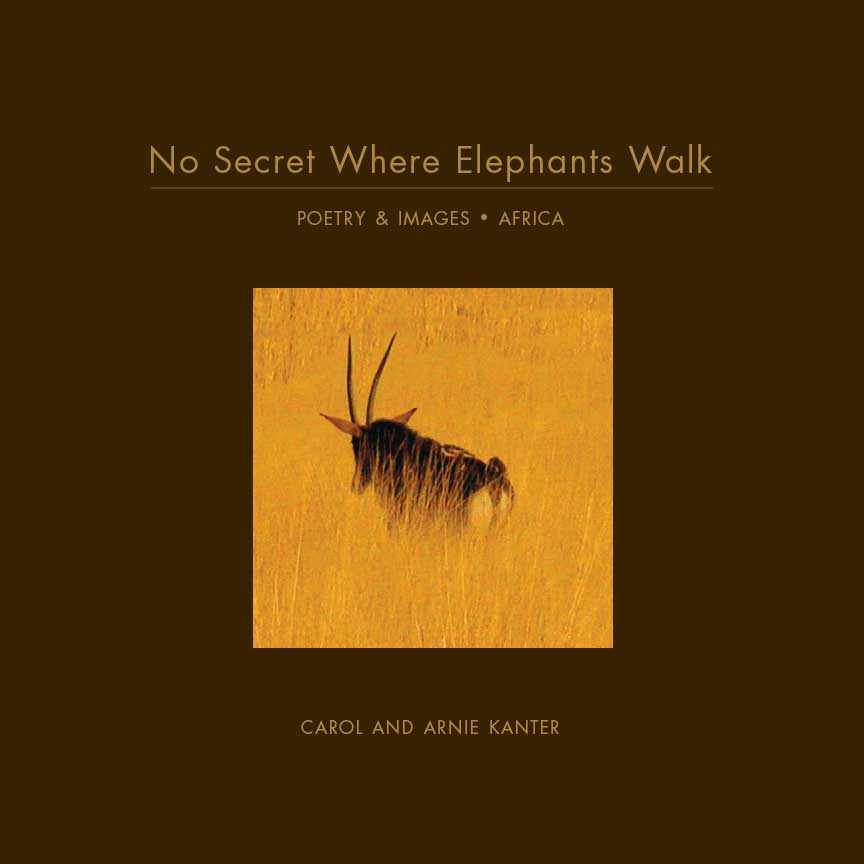