As usual contributors to Solace in So Many Words have been busy writing and publishing.

Susan Mahan has two poems “Voiceover” and “Cabbage Days” in U.M.Ph! Since May, two of her poems with Boston themes have been hanging in Boston City Hall — they are “Mayday” and “Getting Lucky.”  Susan’s poem “On the Lower Left Quadrant” is included in the online journal Poetry Porch; the theme was bridges. Kathleen Kirk also has a poem (“Last Step”)  in that issue.

Fathers was the theme for the June issue of Quill and Parchment, and Susan’s poem “Night and Day” was included.  “Measuring Up” and “To the Mother of Boys” recently appeared in Cradle Songs: Anthology of Poems about Motherhood (published by Quill and Parchment).

In July, Susan’s poem “Spectacles” appears in Beltway Poetry Quarterly, the theme of which is the federal government (not usually the stuff of poetry).

Kathleene Donahoo’s story “Mr. Frank” appears in Muse & Stone, the literary journal from Waynesburg University. She also has stories forthcoming in Saranac Review and Pearl Magazine — I will let you know when those issues are out.

Speaking of Pearl Magazine, did I tell you that Donna Hilbert has work in issue 45 of Pearl Magazine?  Also, Donna’s terrific poem “Mother Tongue” just appeared July 17, 2012 on the your daily poem site (it originally appeared in Pearl).

Jan Bottiglieri has three poems in issue 23 of  Prime Number, which is the online magazine from the awesome Press 53.  The poems are “Nineteen,” “Homunculus,” and “The Fiery Skipper.”

Antler has a poem called “Pornographic Ice Sculptures in Eternity” in Express Milwaukee. 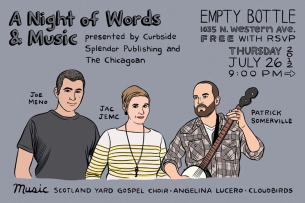 Chicagoans especially  are awaiting Joe Meno’s new novel, Office Girl (Akashic Press) — there is a party this Thursday at The Empty Bottle in Chicago. (I am trying to talk someone into going with me as I know I want to attend.)  The Night of Words & Music also  features Patrick Somerville and Jac Jemc and  is presented by Curbside Splendor Publishing and The Chicagoan.

Kerry Langan got in touch to let me know of a new short story contest for woman writers. It is the first of what will be an annual contest sponsored by the Women’s National Book Association—the deadline is November 1.

Congrats to Joan Corwin whose short story “Girls with Guns” was a finalist for  Sycamore Review’s Wabash Prize Fiction 2012 contest and will appear in issue 24.2, which should be out any day now.  Also, if you are a movie buff, you may want to read Joan’s guest blog (and other entries by host Barbara Froman) on Beyond Willow Bend blogspot.  Joan writes about Jean Renoir’s film The Grand Illusion.

One more thing, I read the June issue of Poetry magazine from cover to cover–it had some pretty great stuff in it; I especially liked the poem called “And The Gauchos Sing” written by Mike Puican, with its dedication “For Barry Silesky.”   I don’t know whether I liked most the opening lines (“Catalpas blooming up and down Catalpa Street, car alarms blooming / up and down Waveland Avenue–an instant of nature without the narrative.”) or the closing ones (“I tell you that everything has already been written. You say / on a long, difficult pilgrimage Basho wrote on his hat.”)  Lovely.