We had a mild winter and early spring and summer so I guess that is why fall seems to be coming a little early too.  We’ve been treated to some gorgeous days. 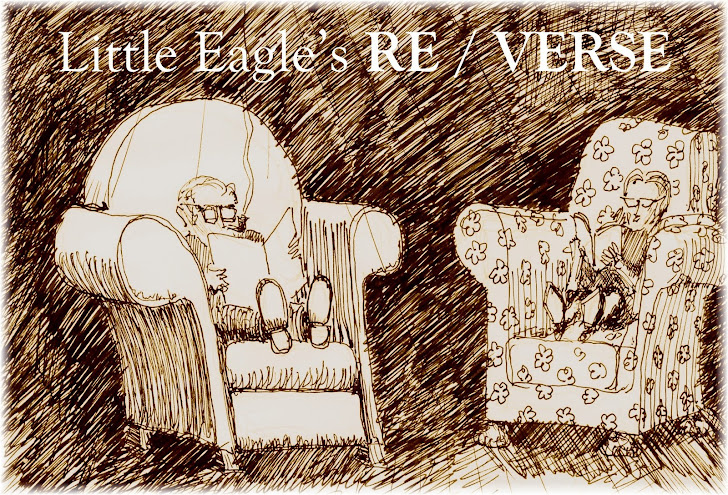 Since my last blog, I’ve heard from Constance Vogel Adamkiewicz to tell me her poems “Drought” and “Stone” were published on Little Eagle’s RE/VERSE website. “Drought” was published September 11, 2012.  “Stone” was published February 20, 2012.

“Drought” is ominous: “Someday from the lemur-eyes of gas masks,/ we will see faint outlines of our ghosts –/ lisping breath of proboscis-hoses.”

The stone in Connie’s poem “Stone” is a headstone and the poem is from Connie’s chapbook, The Mulberry. The grieving process is examined: “I wonder if a sudden parting / of the water, / a sun ray through the thatch / will tell me /where you went /and why so soon.

Check out the site because there are a lot of great poems — a quick look at whose been published include Susan Elbe, Bruce Dethlefsen (Wisconsin Poet Laureate), Al DeGenova (After Hours editor) and many other familiar names. The site is Ralph Murre’s; he is editor and publisher at Little Eagle Press inWisconsin.

Brent Calderwood has two poems (“Elegy” and “Facture”) in The Innisfree Poetry Journal.

Kathleen Kirk has two poems in storySouth (issue 34); they are  “Beason” (“It’s possible he’ll leave me here / in Beason at this little lake”) and “Made for TV” (“Hollywood moves things around / to tell its own story /its own way. All we can do is forgive.”)  storySouth’s editor is Terry Kennedy who  is the Associate Director of the Graduate Program in Creative Writing at UNC Greensboro and Founding Editor of Spring Garden Press.  Here is a little of what he has to say about storySouth, “Just like kudzu, the 21st century south is a mix of traditional and new, regional and international. . .  . storySouth’s most important mission is to showcase the best fiction, creative nonfiction, and poetry that writers from the new south have to offer. Special emphasis is given to finding and promoting the works of promising new writers.”

I just ordered Wally Swist’s new book.  Published by Southern Illinois University Press, Hung Po and the Dimensions of Love is described this way: “This luminescent collection illustrates the joys to be found in the everyday world and the power of existence. Unveiled here are the twin edges of love and madness; the quiet mysteries and revelations of a New England night or the glittering spark of snowdrops; the sharp scents of sugar maple and cinnamon; and the rustle of a junco’s wings. From the restoration and peace of silence or the rush of a brook, to spiraling hawks and Botticelli’s “The Annunciation,” Swist’s poems linger somewhere between the earthbound and the sublime.”

In addition to writing poetry, Ellen Bass continues to lead poetry workshops.  She has ones planned on the West Coast  and Spain (2013). If you’re interested check out Ellen’s site to learn more.

I have a poem title “How to Know (Taxonomy)” on a fun site called Porkopolis.