Yesterday all the talk was about the super moon. So I had to get my camera and try to capture its beauty. Take a look at Glimpse of Solace to see how I did.

Meanwhile, the poetry world is upset with a recent article (“Poetry Slam, Or, The decline of American verse”) in July Harper’s by Mark Edmundson.  Because the article is behind a paywall and I am not a subscriber, I was not able to read it entirely.  But I have been reading all the articles about the article.  One of the first responses is “Why is modern poetry so bad?” written by Ron Charles and published in The Washington Post.  Another response came in The Huffington Post from Seth Abramson who asks, “Why is Contemporary American Poetry So Good?” Yet another response appears in The Atlantic Wire; it’s “Can Modern Poetry Be Saved?” and is written by J. K. Trotter.

Don Share, who is the new editor of Poetry, responds to Edmundson’s specific complaint that poetry “must burn to attack some issue” by linking to the June issue of Poetry, which is entirely devoted landays, which are Afghan folk poetry, formed of couplets. Eliza Griswold, in her introduction, explains, “a landay–an oral and often anonymous scrap of song created by and for mostly illiterate people: the more than twenty millions Pashtun women who span the border between Afghanistan and Pakistan.”  The issue is a must-read.  Eliza Griswold spent years collecting and then translating these landays sometimes under some pretty scary circumstances; she travelled there with photographer Seamus Murphy whose pictures are another highlight of this issue.

Another issue that has been the recent topic of articles on poetry is plagiarism.  On April 26, Sandra Beasley’s article “Nice Poem; I’ll Take It” appeared in the The New York Times and recounts how “The Deer” by Helen Mort was copied by Christian Ward and awarded the Exmoor Society’s Hope Bourne Prize. She came to find that the text of her poem “August” was also appropriated by Ward (he titled it “July.”) On May 22, Allison Flood reports in The Guardian, that another British poet, David R. Morgan, is also guilty of plagiarism; you may want to read her story, “Another plagiarism scandal hits poetry community.”

Now to the hot fun.  Make sure you come out to The Empty Bottle, Sunday, July 7, from 1:30 until 6, for the Pop-Up Bookfair.  Organized by the folks at Curbside Splendor, this pop-up bookfair is the third one they’ve had.  I signed on again because it is so much fun.  There are plenty of book sellers (more than 40), with all kinds of books to buy.  Plus, the bands are always great.  If you rsvp to The Empty Bottle,  there is no cover charge.

As you probably know, I am a big fan of Curbside Splendor; their catalog is great and keeps getting better.  Curbside is running a special; for $75 you get a Curbside Gold Membership, which entitles you to all twelve of their Fall/Winter 2013 books.  Such a deal!  I’m golden — how about you? 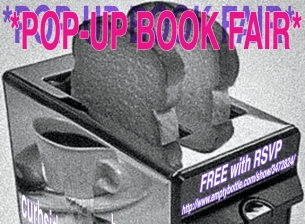