Happy Father’s Day to all. Please make sure to read Laura Rodley’s poem, which I have posted as a guest blog.

Pamela Miller (who contributed “What It’s All About” to Solace in So Many Words) has new book from Mayapple Press. It’s called Miss Unthinkable.  Here’s how it’s described:

“Who is Miss Unthinkable? In this latest collection from Chicago poet Pamela Miller, she’s a shape-shifting sorority of mysterious, funny and wise female characters who don’t let anything get the better of them—from undependable husbands and lovers to breast cancer, aging or even death. The women who strut their stuff in these poems wear “electric sunglasses” and “bracelets of miracles and plagues”; they “thunder up the stairs of desire” and write love letters “juicy as mangoes”; and when confronted with their own mortality, they defiantly “jitterbug with Death in some roadhouse dive,” then “run war-whooping into the light.” In poems that range from the fantastical (“On Our Honeymoon in New York City, My Husband Turns into Times Square”) to the autobiographical (the 11-poem sequence “The Body at Fifty”), this book chronicles and celebrates the resilience of the female spirit with equal parts respect and rowdiness.” 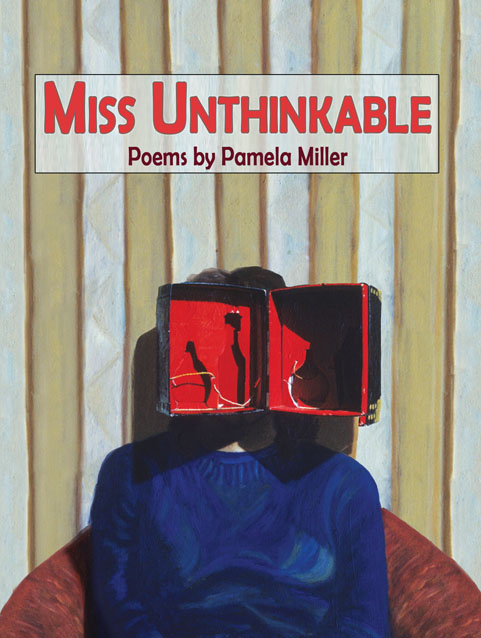 Ellen Bass has two poems (“Saturn’s Rings” and Ode to the Fish”)  in HillTromper (Santa Cruz). Also if you are thinking about attending a writer’s workshop in poetry, consult Ellen’s site because she hosts a number of workshops each year and is well-known for helping her students push their poems to excellence.

I am happy to report my work has recently appeared in two literary  journals.  “Awkward” appears in the latest issue (issue 15) of Prism Review, which is published by University of LaVerne.  I haven’t read the entire issue yet but so far I have been impressed with lots of the writing in this journal; especially the stories of Ned Randle (“The Boston Tar Baby”) and Grant Garland (“Out of Misery”) and the poem “Midnight Soliloquy” by Stephen Longfellow.

My poems “Opossum” and “Hey Teacher” appear in the latest issue of The Hummingbird Review. The issue also contains an interview with Billy Collins.  If you have any questions about titles for your poems, you may want to consult this interview because the former poet laureate gives some insight into this subject.  Along with the interview, the anthology which focuses on Hollywood  has short stories, poems and a screenplay.

I got a kick when I opened the book and this message fell out.  It’s a good thing I was wearing flip-flops.